A Place of My Own by Michael Pollan

A year or so ago, my daughter (who is a voracious reader) was notsomuch in the writing department.  She had painfully slow and sloppy handwriting, which made it hard for her to want to do any writing.  Even just writing a title of a book she had just read on a book log was a chore.  So, I started a notebook where we exchanged letters based on what we were reading at the time.  It got her writing and thinking about what she was reading, and it was (and is) great fun for both of us.  We picked it back up this summer, and it brings me such joy.  Here's a recent exchange: 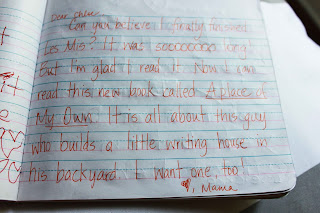 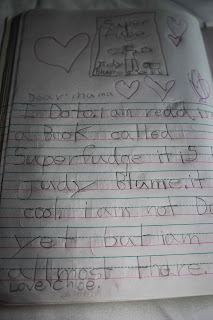 So.  Glad we cleared that up.  Apparently, there's a little writing house in the future of our yard.  Unfortunately, it is probably greatly in the future because we still have SO much we need/want to do on the "big" house we already have, including finishing the guest bathroom/library and the stairwell (both of which might happen soon, so keep your eyes on the lookout for a house update).  But this book, A Place of My Own: The Architecture of Daydreams certainly delivered on its promise.  It handed me a blueprint for this daydream of a project and kept my wheels turning on topics such as woodwork, craftsmanship, class, and place - all near to my heart and mind. 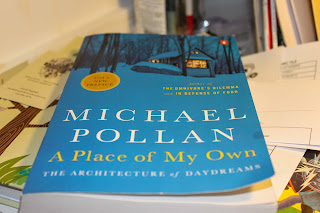 In the preface, Pollan makes clear that this is not a how-to book, so that blueprint he handed me was not one for building the house itself; rather, it is a blueprint for the daydream, a way in to this most cherished of ideas: a place of one's own.  Clearly, Pollan is drawing on the rhetoric of Virginia Woolf here, but he is also finding fuel in Thoreau and ancient Roman texts on architecture by Vitruvius and French writer Gaston Bachelard and Frank Lloyd Wright and so, so many others.  Guys, if there's one thing you can count on is that Michael Pollan will do his homework.  Though I'm sure some find him tedious, I love his thoroughness and attention to All. The. Details.  I learn so much from him.

The premise here is that he wants to build a little cabin in the back of his somewhat sizeable New England property.  He has an architect friend who just completed a renovation of their main house, and Pollan asks him to design this little writing hut.  The plan is that Pollan will build it mostly himself, over the course of weekends and holidays, a goal he hopes will help him move out of the abstract world of words and into the concrete world of wood and stone.  He enlists a local carpenter to mentor him and build with him, and some 2 1/2 years later, he has a writing house, a house that confers benefits as Bachelard described them:


If I were asked to name the chief benefits of the house, I should say: the house shelters daydreaming, the house protects the dreamer, the house allows one to dream in peace. (7)

In the book, Pollan takes his reader on the journey from conceiving of and designing the building, choosing the site, roughing it in, and finishing it.  He tracks the conflicts between builders and architects and dwells fully in each stage of the process.  Perhaps my favorite section was the chapter on choosing the site.  Place is so important to me, and Pollan explores the concept of place, of inhabiting and investing in a place, and questions what makes a place feel "right."  As he considers one site (the one he ultimately chooses), he writes


The betweenness of the site seemed auspicious too; its standing on the hedgey margin of things, between field and wood, sun and shadow.  The place stood apart, and I knew it was that part of me - the self that stood a little apart - that I intended this building to house. (42)

Beyond just being beautiful prose, that passage gets at the humanity of this project.  Pollan is not just constructing a building; he is uncovering the truth of a self and creating a place for that self.  I loved the philosophical elements of this book, but I also loved all the detail of the actual construction, something I know some readers would get bogged down in.

The detail is not the only potentially problematic area.  The other point of conflict for me is the issue of class. Pollan occasionally makes dismayed reference to how much the building is costing and the complexity of this supposedly "simple" writing house.  I have no problem with him choosing to build such a custom design, but I wanted him to acknowledge it somehow.  I wanted him to admit that most people who undertook to build a structure themselves in the backyard might not have quite so many resources at hand.  I wanted him to broaden the conversation just slightly to encourage those that want to find that space for that self but can't afford to have windows built by hand and fir shipped in from Oregon.

This is a small complaint, though, and I thoroughly enjoyed this book.  It fit (like tongue and groove flooring) into my current preoccupations while still pushing me forward and challenging my brain.  And though I can't really start working on our own little writing house, I can start daydreaming.  What do you think?  Should it go here by the creek? 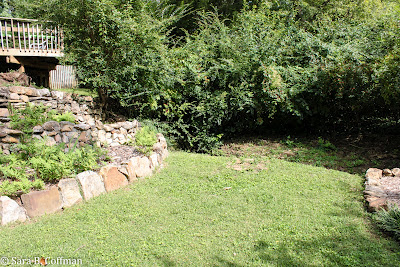 Or here in this little corner of the yard? 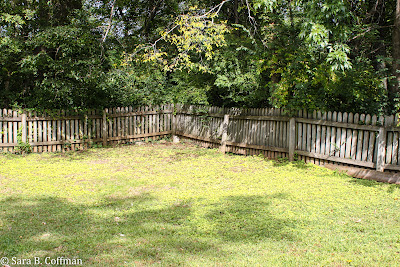 Sara
"Blessed is the man who, having nothing to say, abstains from giving wordy evidence of the fact." George Eliot. Thank God I'm not a man. Follow me on Twitter @wordyevidence.